The Geberit tap systems for public and semi-public sanitary facilities

Elegant, electronically controlled wall-mounted taps, free washbasin surfaces and between them more than enough space to wash your hands: this image is often precisely what property owners and
managers envision when thinking about the public or semi-public sanitary facilities in their projects. From now on, this is exactly what they can expect – without restrictions or limitations.
With its new tap system, Geberit – Europe’s leading manufacturer of sanitary products – is making room for a radical rethink: electronic washbasin taps can be slim, attractive and robust all at the same time. And installing them behind the wall is just as simple and permanent as installing them in the washbasin. Wall-mounted taps are somewhat the focus here, as these are the more practical solution for everyday operation as well as for cleaning. The electronics, the mixing valve and the additional components, which were previously housed in the tap housing or directly behind it, are now located in a separate function box under the washbasin, where they are well protected against moisture and easy to maintain. What’s more, the new tap system provides a great deal of flexibility when it comes to choosing the power supply. Electronic washbasin taps are fitted with a sensor and make washing your hands particularly hygienic as you don’t need to touch anything to turn the tap on or off. What’s more, they are generally very water-saving as they automatically switch off the water flow as soon as your hands leave the sensor area. These taps are able to fulfil their function because they are fitted with electronics, valves, a mixer and a power supply. In deck-mounted taps, these components were previously housed in bulky tap housings; however, in wall-mounted taps, they are covered by a large collar directly behind the tap.

Electronic washbasin taps are primarily used in sanitary facilities in public and semi-public buildings such as airports, shopping centres, schools, or bars and restaurants. In these areas that are often heavily frequented, they need to be able to withstand a lot, including rough use. Furthermore, taps generally installed in the washbasin as well as their electronics are constantly exposed to high levels of dampness and moisture, which can increasingly lead to malfunctions.

The vast majority of electronic washbasin taps are now what is known as deck-mounted taps, meaning that they stand on the washbasin ceramic. It’s rare to come across touchless wall-mounted
taps. However, there are several reasons why they would be more practical: firstly, they leave the entire washbasin free, which makes cleaning it significantly easier. And secondly, they offer sophisticated ergonomics when washing hands. The reason why we see so few electronic wall-mounted taps, despite these advantages, is relatively banal: until now, there has been practically no solution for planning them safely and installing them without errors.

With its new, modular tap system, Geberit has developed an impressive solution to remedy the general shortcomings of touchless taps. Namely, housing all electronic components, with the
exception of the IR sensor, but including the mixer, valves and the power supply in a separate, 14 cm x 14 cm small function box. This is installed under the washbasin and is therefore located outside of the wet zone and the user’s view. The entire system is better protected against manipulations or vandalism as a result. The Geberit tap system also includes newly designed drywall-construction installation elements for washbasins. These installation elements are prepared for the easy and safe installation of Geberit wall-mounted taps and ensure that the tap housing is precisely aligned (vertically and horizontally) and firmly fixed.

Not having the function parts located in the tap housing opens up a whole new world of design
possibilities for the tap itself. A fact illustrated by the Piave and Brenta models designed by London-based design studio, Christoph Behling Design, with their incredibly slim, timeless and elegant form. Both versions are available as wall-mounted or deck-mounted taps and can be combined with practically any washbasin design. The beautiful tap housings are made of chrome-plated brass. One of its special features is that the water is guided through a reinforced plastic hose that extends from the functional unit in the function box to the tap aerator on the tap outlet. This ensures that the quality of the potable water is not impaired at any point in the tap system.

In addition to boasting an impressive price/performance ratio, the new tap system also promises economic operation. That is to say, there are three available power supply options: connection to the mains supply, battery operation or a self-sustaining power supply by means of a generator unit driven by the pressure of the tap water. The latter does not create any additional costs for energy or replacing batteries.

All components for regulating and maintaining the tap are housed in the function box, where they stay safe and dry. Mixers and filters are easily accessible and can be set up or cleaned respectively without any specialist technical knowledge. The configuration can be modified retrospectively at any time – for example, by installing a self-sustaining power supply.
Geberit’s new washbasin taps Piave and Brenta and the corresponding installation elements will be available in full from April 2017. 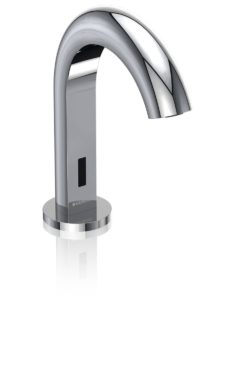 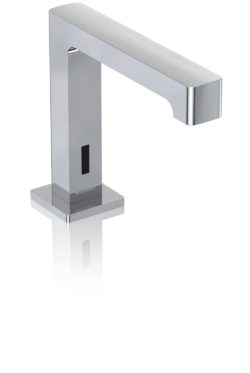 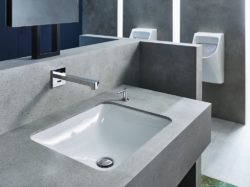 The Geberit tap system at a glance GEBERIT PRODUCT PORTFOLIO • Geberit owns 25 education centres worldwide • Every year approximately 30,000 plumbers, architects and planners are trained on Geberit systems and software • Geberit is interested in passing on knowledge and a vivid exchange of experience • Success at the international level is a matter of dialogue • Geberit relies on partnership in business relations and fairness in interaction with competitors and associations