Enlightenment and education helped Cambridge master many crises through the centuries. This is made evident by the abundant number of historic walls belonging to colleges and university buildings; their sandstone or brick façades dominate the cityscape. St. John’s Innovation Park continues this longstanding architectural tradition. In terms of design, however, the contemporary office and research buildings differ from the historic city centre, at least at first glance. The architects opted for a practical skeleton construction in concrete for the new Maurice Wilkes building. They designed a central staircase and functional core set between flexible open plan office space on both sides and a light ALUCOBOND® façade. In line with the historical original buildings, the architecture delights in projections and recesses, in the symmetry of the building, in vertically set elements and columns, central axes and entrances and in striking building heights. Unlike in the past, this is not just for ornamentation or for structural purposes, but to enhance the functionality of spaces and the building’s potential to create its own shade. This results in the best possible use of space, agreeable room temperatures and, at the same time, maximises daylight. The screw-fastened ALUCOBOND® tray panels in Silver Metallic and Bronze Metallic reference the warm colours found in the old buildings but add a contemporary twist by adding a discreet shimmer. The ALUCOBOND® elements are large-format and very thin, but since they offer excellent flexural rigidity, they also envelop building elements without being bulky. The window bands, designed in relief, and the large-format façade panels appear delicate and refined as if they were carved in stone. Technically, the building sets standards with a BREEAM rating of “very good”. That rating does not only include energy efficiency, but also the entire building cycle: from responsible practices on the construction site and sustainable social, economic and operating factors, to recycling the building materials. Recycling is likely to be at some very distant point in the future, of course. Because it is well known that buildings in Cambridge endure.

When it gets noisy, take a clear-cut position. Look at things in a nuanced way before adopting a robust approach. The office building of a mobile operator located on one of the main access roads to Stockholm follows exactly these precepts. The building’s interior design is characterised by a range of different ambiences, atriums to promote communication and a striking red staircase, which is a key element linking all parts of the building. The interior has already received commendations and many prizes. But the façade is in danger of being overlooked although it seems just as worthy of acclaim. First of all, because the architecture makes a distinctive and assertive statement with its large-scale, modular 1960s style, which is not only state-of-the-art technology but also absolutely justified. The modular double façade counteracts the street noise, channels direct or reflected daylight into the building interior, creates a stunning exterior appearance and saves time and energy. And that is indeed the second factor. Thanks to prefabrication façade elements could be quickly and also individually produced and installed. And, now we come to the third point, since the intention was to build a memorable but in no way monotonous large structure, the architects opted for different formats and designs for the windows and their frames. In so doing, they have created a modular façade with a heterogeneous look. They planned square glass elements, recessed arcades and rows of large windows. Above all, they designed the ALUCOBOND® cladding for the frames in different ways: sometimes bevelled on only one side of the element, sometimes on both of them and sometimes on neither. This enlivens the façade with light refracting in a multitude of directions and, depending on light conditions, etching different highlights on the façade. The large façade front, which stands out in the cityscape, acquires depth, a rhythmic three-part appearance and at one end, an iconic twelve-storey tower. No wonder the building has been nominated for the Swedish Glass Award 2020, as have other ALUCOBOND® façades, by the way. It really makes sense to take a clear-cut position and robust approach.

The buildings created by people accustomed to gargantuan dimensions and the industrial charm of shipyards, container ports and polder landscapes turn out to be equally vast, urban and iconic, and not disproportionately focused on details. The so-called Supermodernism or “SuperDutch” actually originates from Rotterdam but spread long ago over the borders to neighbouring countries and to cities worldwide. It may not be cosy architecture, but the Cordeel Headquarters in Temse on the River Schelde in Belgium shows that it can have strong connections to the local environment. Bingst

Architekten built a 100-meter-long steel oblong on the site of what was once the world’s largest dry dock. The dimensions alone are impressive: a 1,200-ton building straddling the dry dock at a height of 20 metres, set on two comparatively delicate-looking reinforced concrete supporting walls. The two-storey block comprises two connected steel lattice girder structures which stretch the length of the whole volume and make a 73-metre span feasible. The steel structure was prefabricated and rolled over the dock by two cranes and then hoisted onto the walls. The rest of the building was constructed on a platform just like a ship in dry dock.

The wraparound glazed façade and the ALUCOBOND® composite panels, which clad the floor slabs and the underside of the oblong volume, are extremely reflective. The mirror motion in both sky and water and visually extend the axis of the building’s supporting walls. This creates a bold building over the harbour, one reminiscent of the bridge on a massive steamship. There are views as far as the Cathedral and Antwerp Port from here and, who knows, maybe one day a bird’s eye view of steamship being built in the dry dock.

Travellers speeding eastwards along the winding E57, accelerating through Slovenia’s wooded hillsides and racing through tunnels and over bridges, should slow down halfway between Ljubljana and Maribor and take a break. Next to the motorway near Žalic, there is a hotel featuring architecture which celebrates the “road trip”.

Its ALUCOBOND® façade in dark grey metallic is arranged into vertical folds and its base in natural stone cladding is reminiscent of 1950s American Modernism, along the lines of Mies van der Rohe’s façades. It is evocative of Cadillacs driving down wide roads and of a time when unlimited motoring through the countryside was symbolic of the future.

In front of the hotel, there is a large car park, and the entrance is set back discreetly. Moving from the entrance into the interior, the marble floors and oak slats on the walls also pay homage to bygone times. Widening like a funnel, the atrium opens onto a small patio behind a glass façade which stretches the height of the building.

Set against dark anthracite walls, brass handrails, door handles and pendant lights provide nostalgic glamour. A spiral staircase leads to the galleries surrounding the atrium on every storey. Flowers bloom on the walls of the rooms in wallpaper inspired by Japanese graphics, and delicate birds enhance the dark carpet in the corridors. This feeling of flying over the road through lonely landscapes, this distant connection between travellers, nature and time finds a perfect interface here, in this isolated spot in the middle of nowhere.

Rather lonely, rather beautiful, recounting nostalgic stories of bygone travel. A hotel with hard shadows, clear lines and graphic calm – like an Edward Hopper painting. 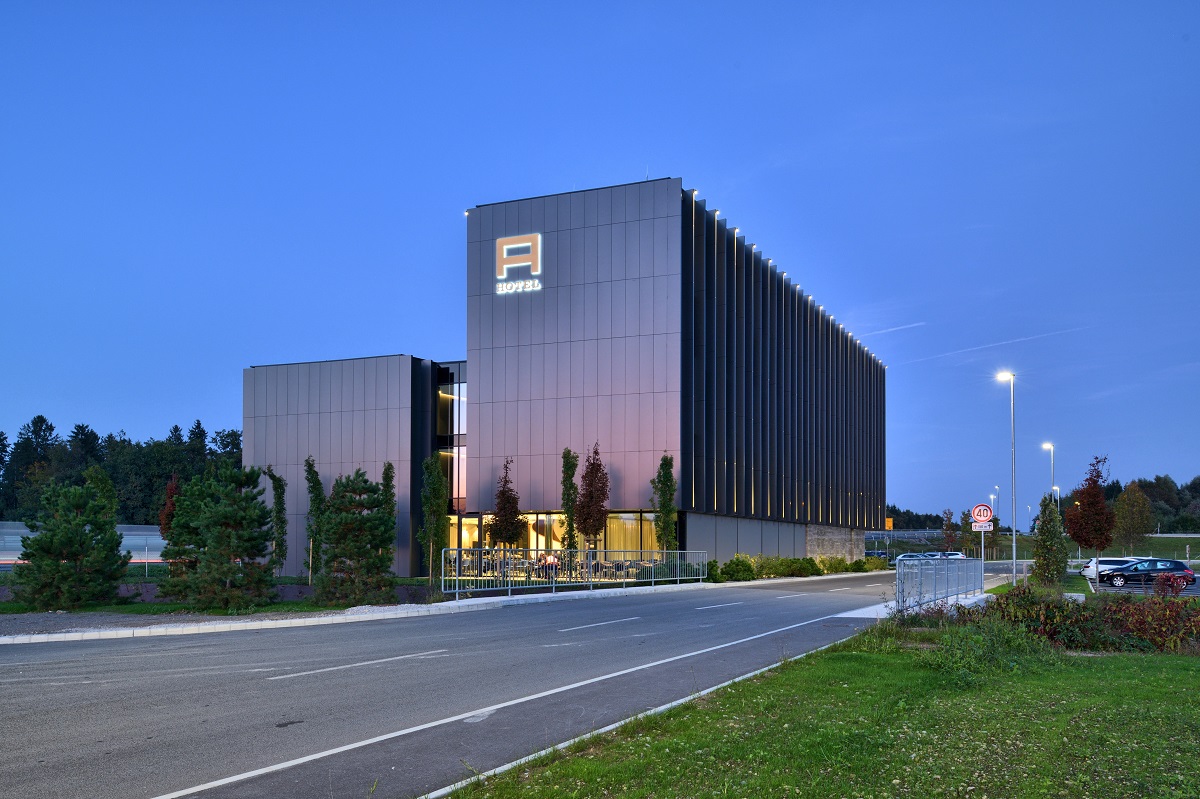 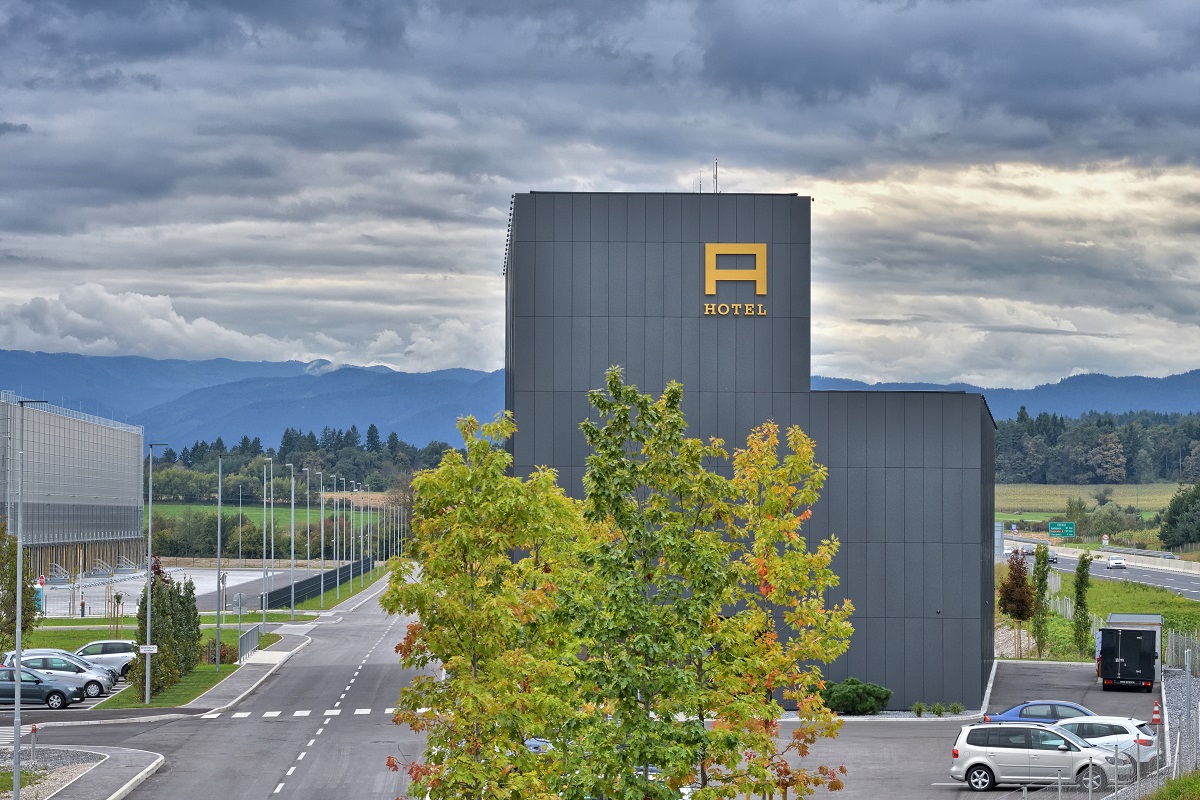 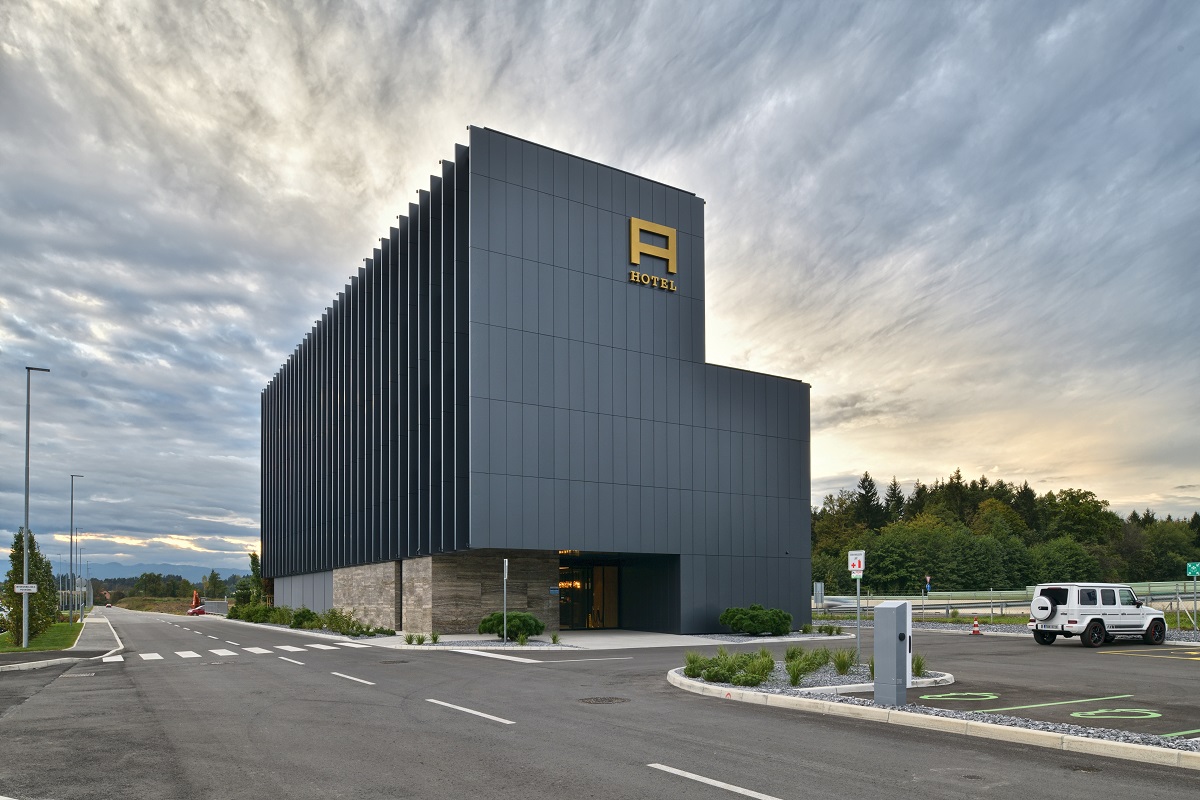 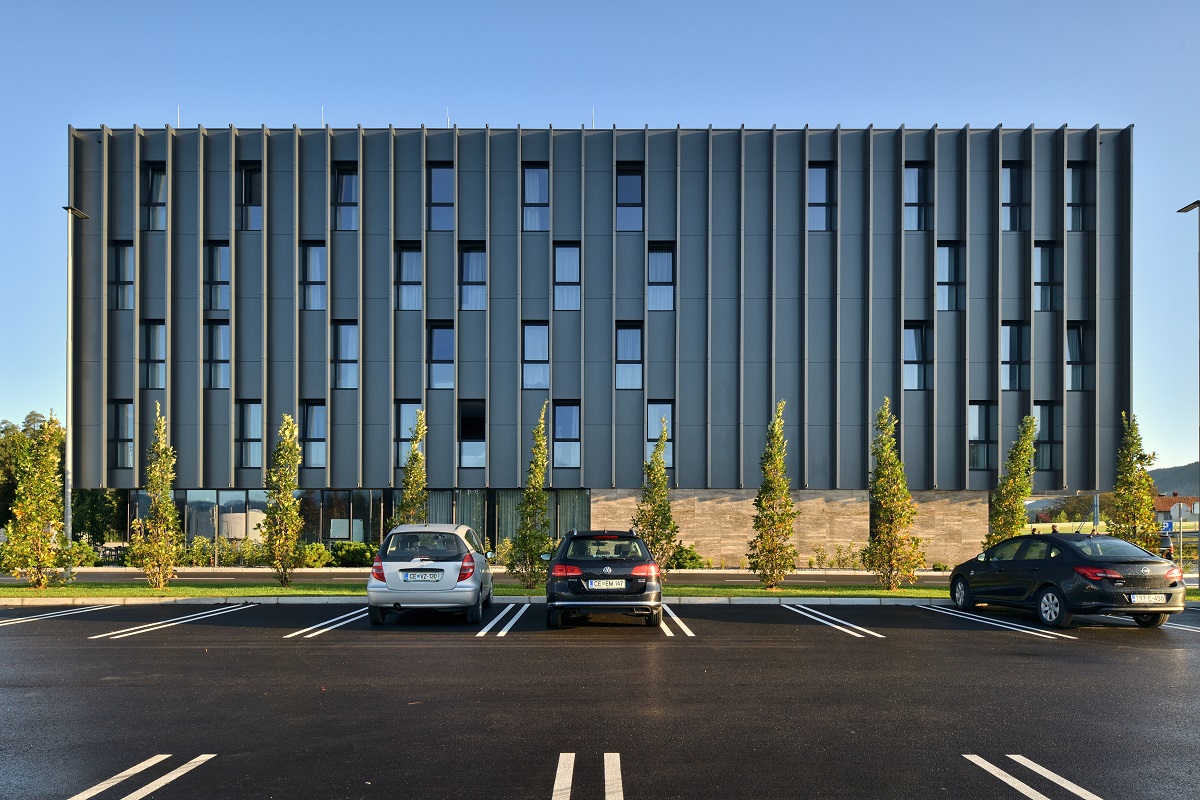 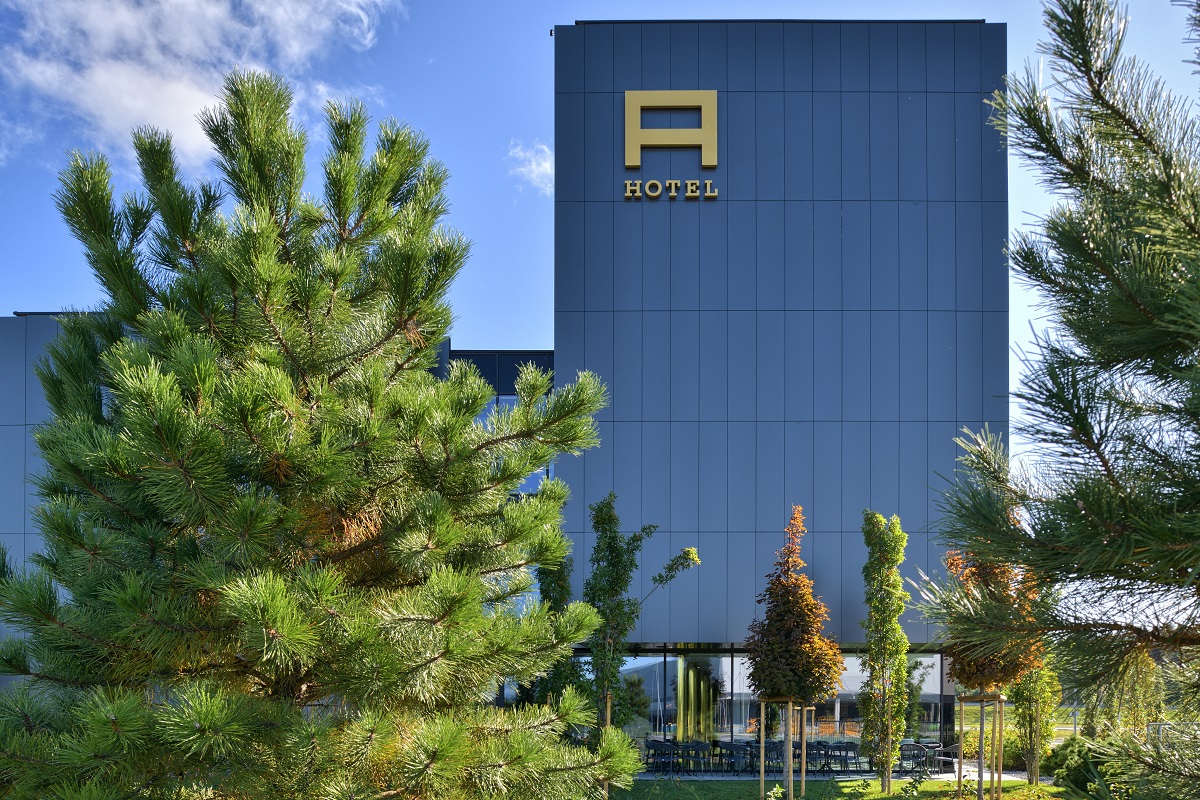 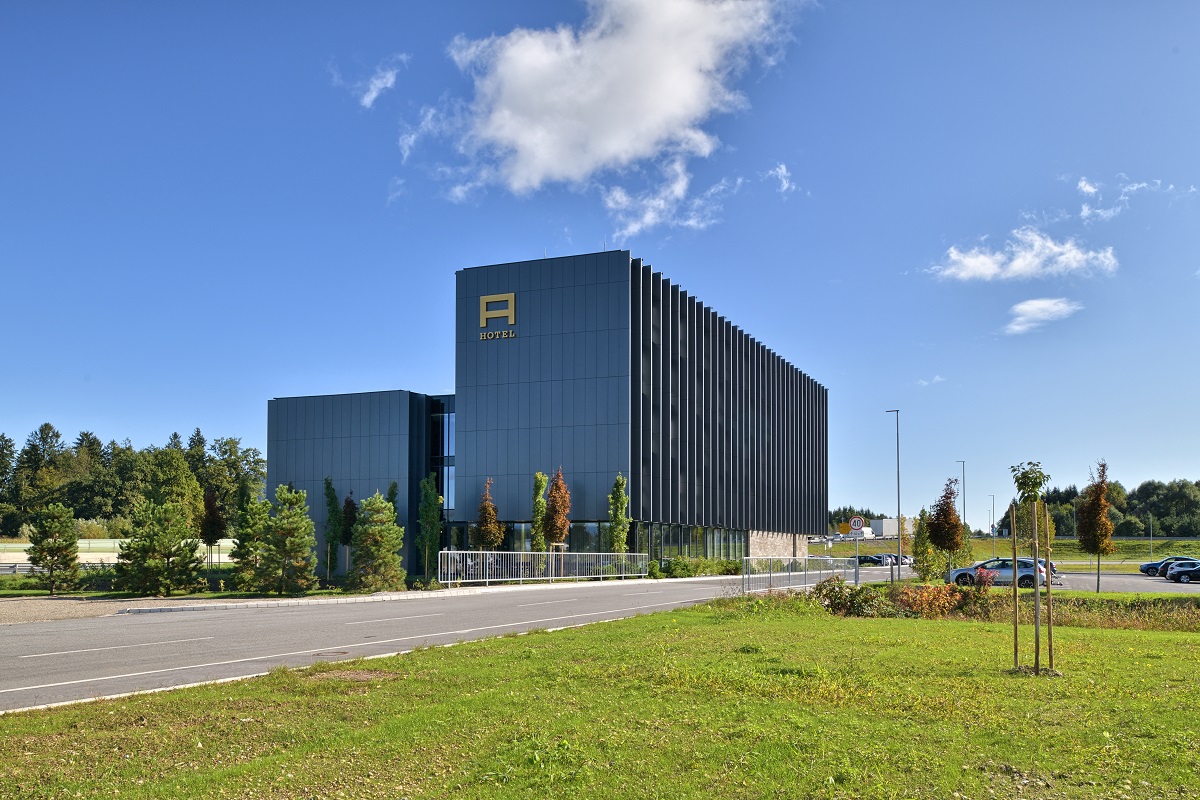 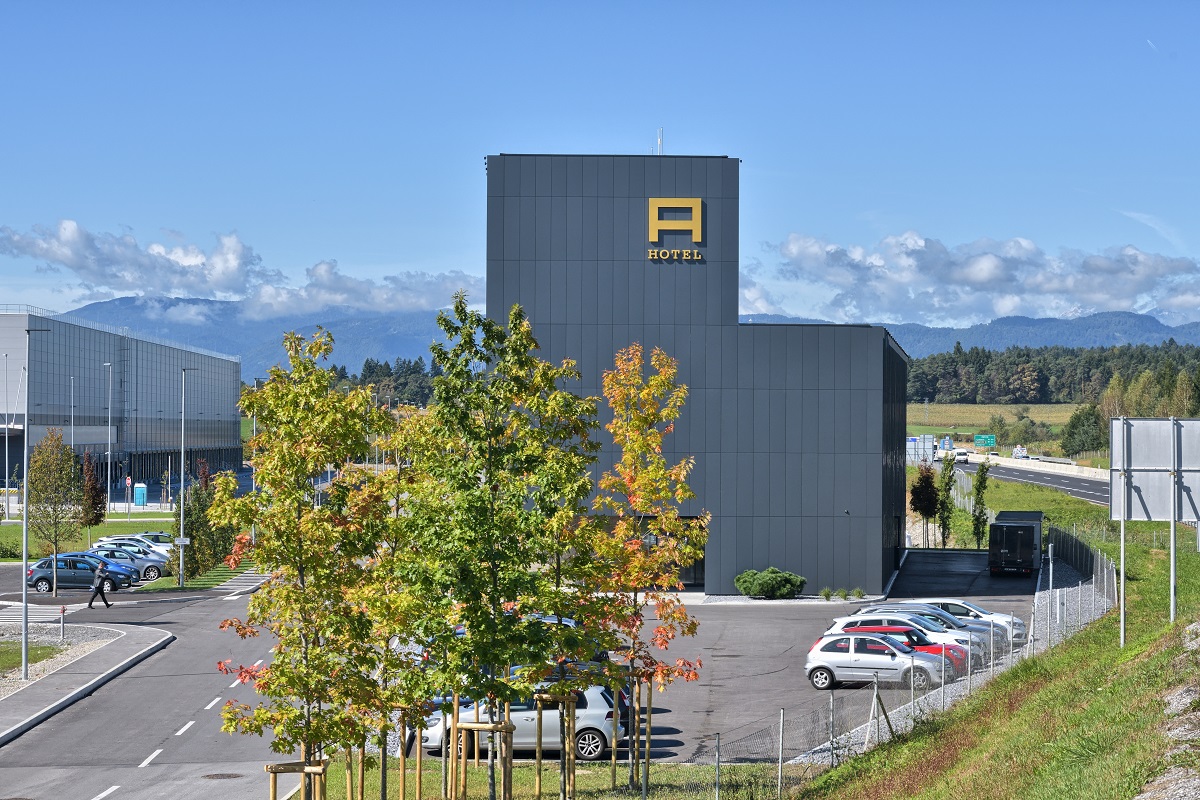 It is not always the size that counts: Germany’s most famous, but not tallest, skyscraper stands in Dusseldorf: the elegant 1957 high-rise “Dreischeibenhaus”, a daring commitment to a new era and to the westward looking spirit of the age. What is today’s “zeitgeist”? It is bohemian and Francophile, at least that is the case at another super slender structure, the 25hours Hotel tower in Dusseldorf built by HPP architects.

What used to be railway land has been transformed into “le Quartier central“, a residential, working and leisure district in Pemplefort, right in the middle of Dusseldorf. The nineteen-storey hotel tower marks the starting point of the new district and is situated on the threshold between old and new, impacting on both of them.

This means its façade has a particular significance. The architects took a classic approach to subdivide the tower: lobby, café and seminar rooms are located in the base, hotel rooms in the middle section and finally, restaurant, bar and wellness area are set at the very top and crown the whole structure. The façade comprises windows, whose format depends on their function, and different colours of ALUCOBOND® composite panels.

The positioning of both panels and windows is determined by the façade’s sections. The architects’ choice of a silvery-white surface for the base and the central section, in other words, for the larger part of the tower, means it interacts with surrounding colours, iridises spectacularly in the daylight and responds to the urban atmosphere. This results in the tower becoming an integral part of the surrounding city. The architects created strongly angled window reveals and used gold-coloured cladding to give the openings more depth and add warmth to the façade. Their choice of colour for the crest of the tower makes it stand out.

Seen far and wide over Dusseldorf, the golden pinnacle acts as a striking messenger: a new urban area is evolving on this site. 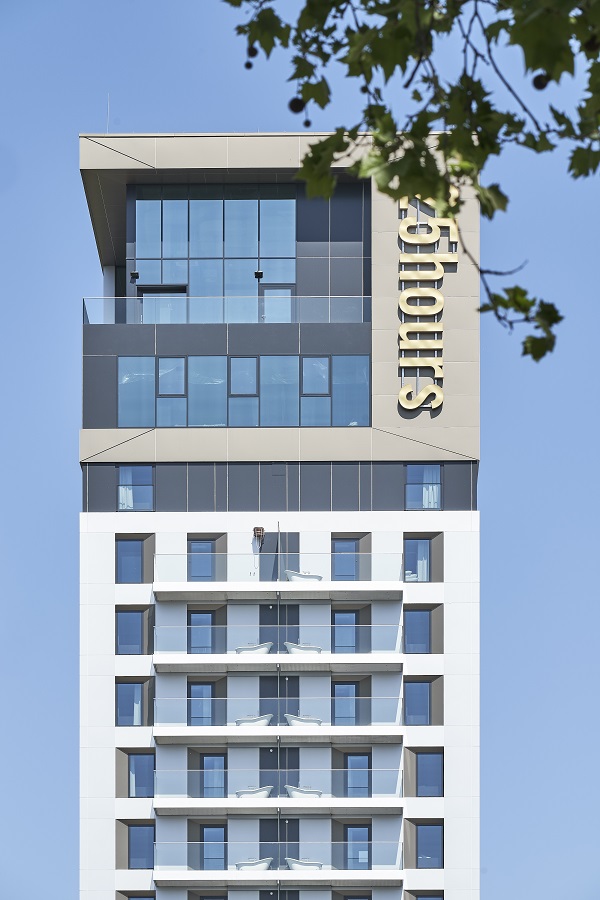 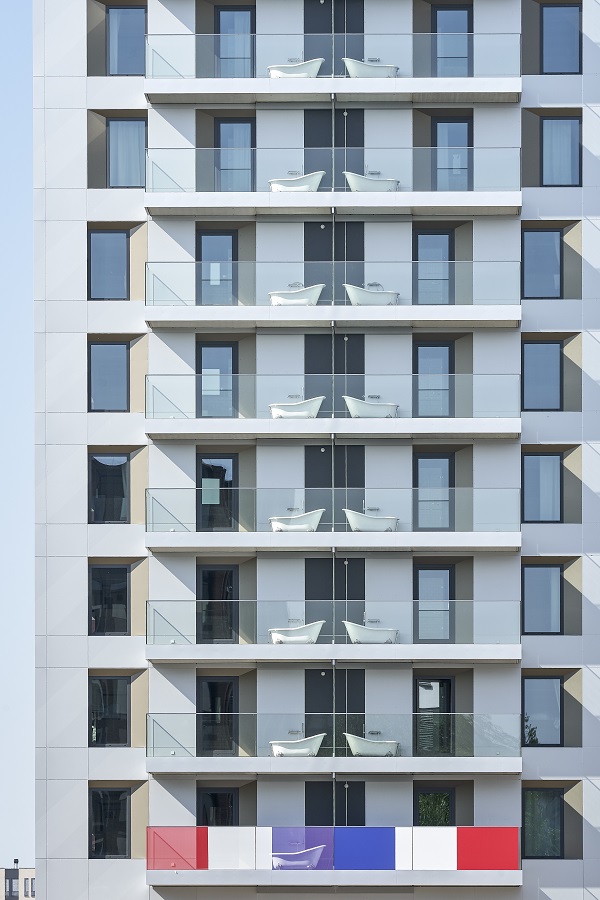 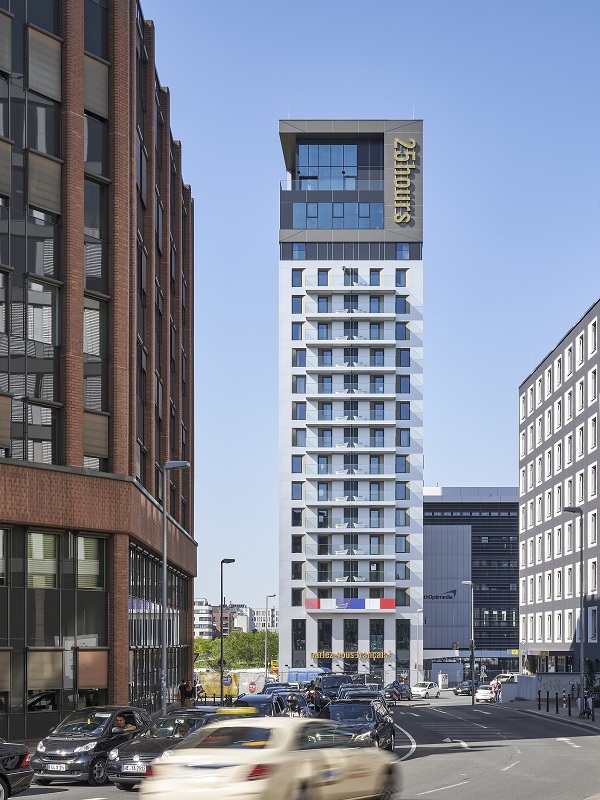 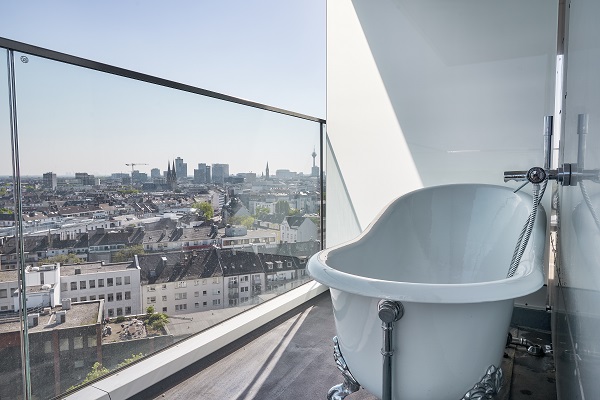 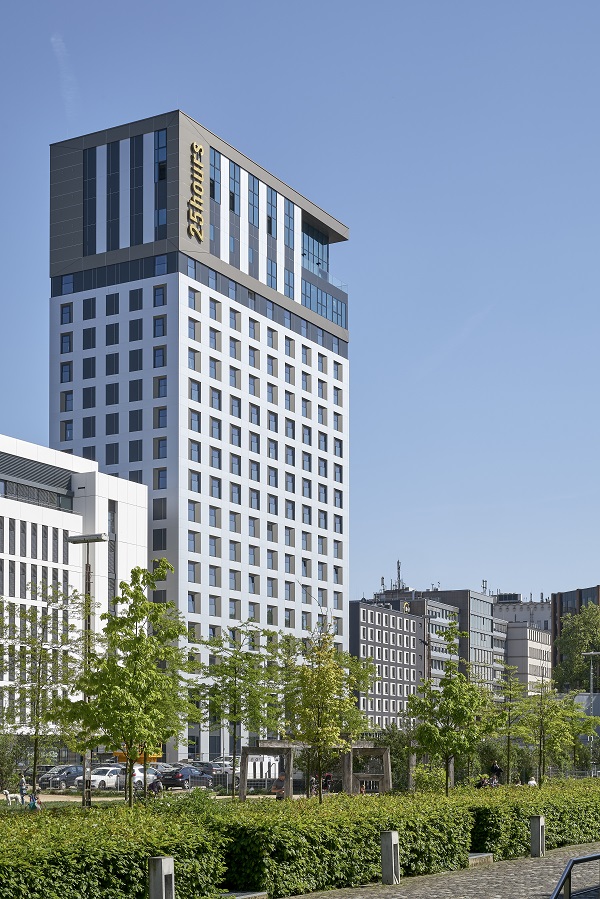 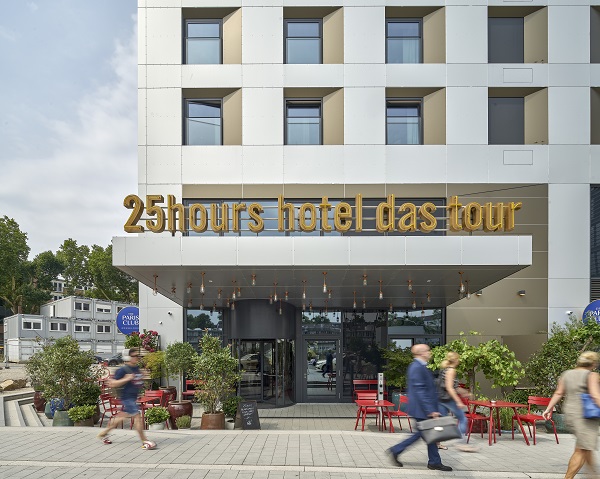 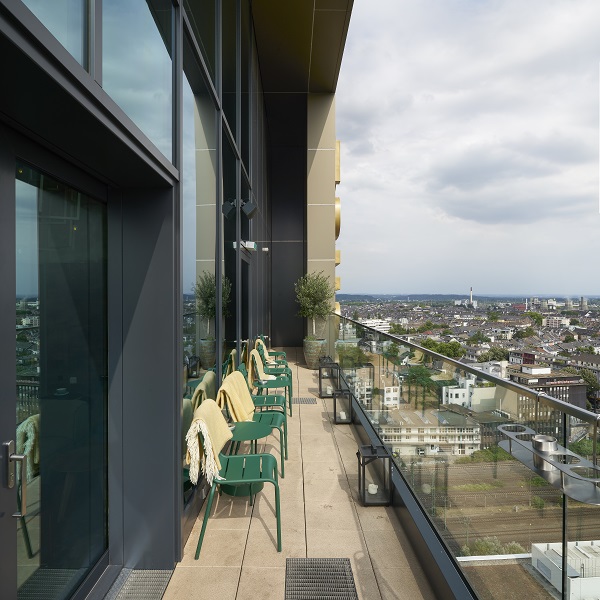 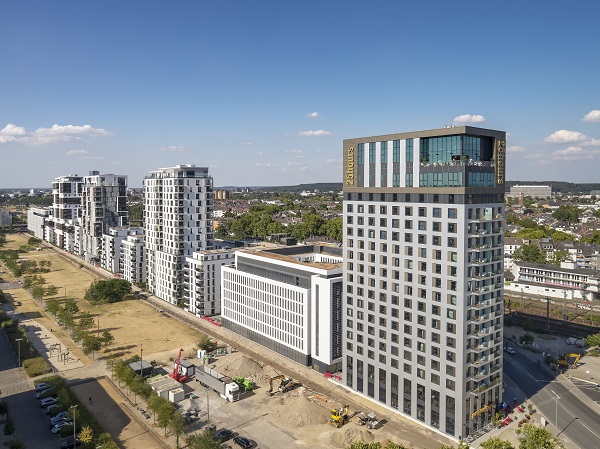 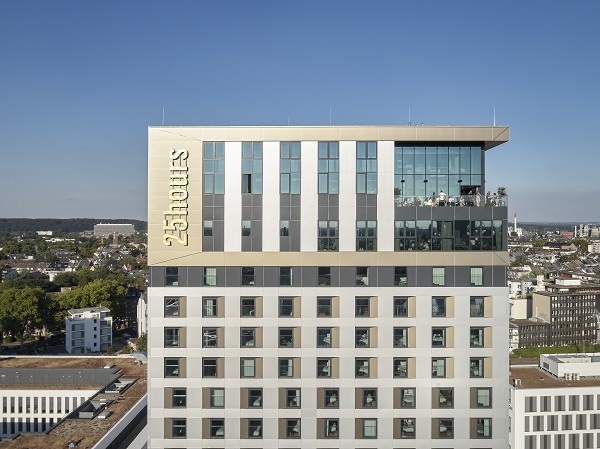 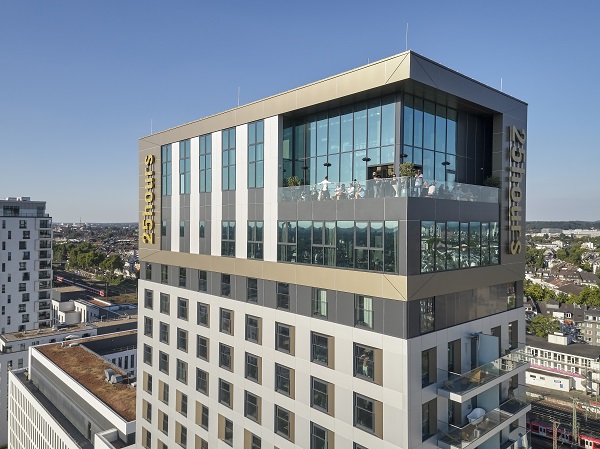 There is no way this Saarbrucken furniture store can keep a low profile like the houses in Masuria. It is simply too large and too tall. The building volume comprises 233,000 m³, its façade is almost windowless and its car park offers spaces for several hundred cars. It is absolutely impossible to integrate, rescale or even hide such a large building in the surrounding urban space.

So, from the outset, the architects’ design has focused on prominence and presence, creating especially aesthetic and impressive architecture for this industrial area between the main road and the motorway, where traffic is heavy and beauty a rather rare commodity.

The boxy volume is draped with ALUCOBOND® which looks as light and simple as folded paper. This appearance, however, belies the complexity of the planning and implementation required. The linear folds in the ALUCOBOND® curtain run close together and are tilted three-dimensionally. This means that no two parts of the façade are the same, and the 4,000 m² façade consists of approximately 2,000 individually cut tray panels measuring up to 700 mm in depth. This in itself would be a feat even using computer-aided design and fabrication.

However, because the folds tilt at a one-degree angle over 20 metres in height, every millimetre deviation from the calculated and planned dimensions increases to several centimetres over the length of the pleat. Any inaccuracy would lead to connections between elements no longer being snug and the joints, which are only 10 mm wide, would end up as wide gaps. This meant that during fabrication and above all while assembling the façade, dimensional tolerances were close to zero, and installation required master craftsmanship.

ALUCOBOND® tray panels were the ideal material for this task because they can be cut and installed with millimetre precision and offer lasting dimensional stability. For instance, they remain dimensionally stable even when there are changes in temperature and they guarantee a façade with a clean, intact appearance.

The pains taken to create this special building have paid off. The staging is successful: during daylight hours, sunlight casts moving highlights and shadows on the subtle silver shades of the ALUCOBOND® Brilliant Metallic façade. In the evening, red LEDs generate dramatic shadows and conjure up a festive atmosphere.